Hmm, lately the grass seems to alternate between soggy and crunchy. Must be the end of another year and time for the second in a series of recycled antique diabolo postcards (with annual update). This year's card features a young German woman wishing everyone a Happy New Year. Prosit can also mean cheers. I remember prosting people on the rare occasions when Berliners would get together to imbibe.

Sorry, no stamp, cancellation, or writing on the back of this postcard. Given the empty space, it was tempting to try and forge a one-hundred-year-old note linking the diabolo craze of 1906-08 to Brown's Da Vinci Code, Wallace's Word, and/or Roszak's Flicker. Honesty and sloth won out, though, so the space remained bare.

The one word to describe this past year is busy. Not hectic, just busy, and not in a bad way. Happy to report I've continued rowing, and actually stepped it up a bit. While I didn't quite row two million meters, 2010 was the first calendar year I glided past two different million-meter milestones, seven and eight. At this pace should reach the ten-million-meter goal, the distance between the equator and the North Pole, late next year. After a celebratory snow cone, plans are to keep stroking. The next ten million should be easier, being downhill and all.

Continue to instruct child and youth care and early childhood education courses at Surrey College. The students seem content, and the college keeps adding new courses to my schedule. Originally hired to teach a couple of classes on play and activity planning a few years ago; have wheedled my way ever deeper into the curriculum. "A course on the history and current state of child and youth care and Canada?" "Sure, I'll learn about it later."

"Stay a chapter ahead," has been the mantra for the past couple of terms. In January, I get to teach another new (for me) course on ethics and decision making. Looks to be interesting.

Even in a slowed-down economy, the little web-based, mail-dice-around-the-world business still sends me down by bike and public transit to the land of freedom once a week to fulfill orders, check mail, and make sure the forest has not completely engulfed the house in Point Bob.

That reminds me, have been waiting over a year to tell this story. One benefit of a small-town post office is you get to befriend the staff. Last year, early in the holiday season, one of the clerks mentioned that the post office was delivering more letters and packages than ever before. The next week a woman at the front of the line was inquiring about the best way to ship the stack of old LPs she was clutching. Sensing a rare opportunity, I blurted, "You shouldn't use the post office for those. I hear the USPS is breaking lots of records this year." The folks in line just stared; the postal clerks enjoyed the reference. Didn't make the line move any faster, though.

Late to the techno-party, have finally discovered podcasts. All the rowing and commuting have become opportunities to catch up on radio and news programs. Podcasts untether me from the Sunday-morning, talking-heads news shows. Now I can listen to Fareed, Christiane, and the others on my schedule, not the network’s.

Chris and I managed to spend a summer week in a cottage on Bowen Island, not far from Vancouver. While I had to leave a couple of days early to teach, Chris got to stay on for the duration. Nothing eventful to report, unless you know who David Suzuki is. Here in Canada Mr. Suzuki is a celebrity environmentalist with his own television show, The Nature of Things. While hiking, am convinced I saw the famous tree hugger behind the wheel of a Humvee that had just pulled out of a nature preserve. I now like to think of Canada's Number One Green spinning donuts and tossing empties in otherwise-untouched wilderness sanctuaries.

Am also engaged in editing a self-help guide for people recovering from psychosis. You may recall a few years ago, I was part of a team that developed a one-day training program to help spread the word about the early signs of psychosis and the value of prompt treatment. My role was to help design the educational aspect of the project. Must have made a decent impression.

For the past few years, one of the team leaders has mentioned the possibility of a new group project. Last year a couple of psychologists wrote the draft of a self-help guide for people learning how to function after one or more delusional breaks. The draft was filed away, waiting for the next round of funding.

About a month ago, I was invited to a Starbucks-style meeting by the two doctors from before. They explained that additional funding had finally come through, and it was time to dumb down the dormant document for the target audience, people recovering from mental illness. "We immediately thought of you," they happily explained. I decided to take it as a compliment.

As the Fraülein says, "Prosit Neujahr!" Chris and I wish the best to you and yours for 2011. 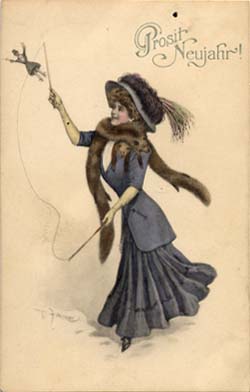