How the dice got their spots

How the dice got their spots

Most people know that the opposite sides of a six-sided die always add up to seven. But what is the relationship between all six sides of a die? How do they wrap around each other?

Some dice manufacturers place the four on the left of the dice. Others put the four on the right side. The same dice company may even change faces for different sizes and styles of its dice. Of course, the three is always on the opposite side of the four. 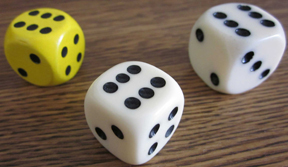 Another way to think about how the spots are arranged on the dice is to view the three sides of the one, two, and three spots. Some people refer to the different layouts as left or right-handed. I prefer to think of the two layouts as clockwise or counterclockwise.

For most six-sided dice the only two faces with spots that are not symmetrical are the two and the three. Both of these numbers usually have the spots run in a diagonal line on that face of the dice. But in which direction? Do the diagonal lines have positive or negative slopes? It turns out that that there are four different ways to lay out the spots for these two faces. 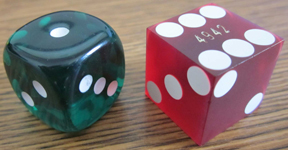 The lines made by the spots of the two and the three faces don't have to meet at one corner. They can run parallel to each other. Again, there are two different ways in which the two lines can run parallel. Assume the six face is on top and the die is placed so you can see the six, three, and two faces. The lines created by the two and three faces can either be positive or negative slopes.

One year the International Jugglers' Association (IJA) held its annual juggling festival at a hotel/casino in Primm, Nevada. You had to walk through the casino to get from one's hotel room to the exhibition hall where the juggling took place. One early morning, about three a.m., I was walking back to my room, through the almost-empty casino. Except for the pit crew, one of the craps tables was empty.

Thinking they might know about the history, I asked the three employees about these subtle differences in the possible orientations of spots on dice. They hadn't given any thought to the idea that the two and three faces could have positive or negative slopes, and they confessed to me that they probably wouldn’t notice the change if someone slipped in a pair of dice that only had that difference.

As we were talking their boss walked up. He had overheard just enough of our conversation to explain that he would notice the difference and wanted to know why his employees wouldn't.

With the realization that the training manual was soon going to be updated, I thought it an appropriate time to leave.

I later contacted a dice manufacturer and was told that there is no reason to explain the difference between various sets of dice. It’s up to the individual designer.